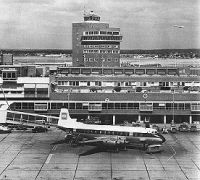 The new Terminal 2 at Heathrow will be officially named in honour of Queen Elizabeth II when it opens next year.  Viewers to last week's BBC 2 series will have heard a commentator pointing out Windsor Castle on the nearby skyline.  The Duke of Edinburgh, in his time as an aviation buff, noted on one occasion the nearness of his home to the airport.

The £2.5bn facility, which is scheduled to open its doors on 4 June, will be officially called Terminal 2: The Queen's Terminal.  Her Majesty opened the original Terminal 2 in 1955, almost 60 years ago and two years after her Coronation.  The old Queen’s Building, a landmark at the airport from the 1950s, went in 2008.

In 1969, the Queen formally inaugurated Terminal 1 and, in 1977, unveiled the London Underground connection between central London and Heathrow – the first link of its kind to connect a capital city with its major airport.