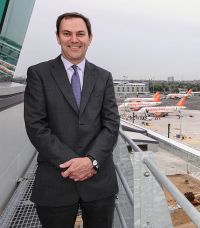 Southend Airport has welcomed a fourth easyJet Airbus A319 at the same time as it has partially opened an extension to the terminal building, clearly a case of ‘work in progress’ that does not really have an effect on passengers in any way.  The arrival of the new aircraft coincides with the introduction of flights to Berlin, Krakow and Newquay.  easyJet now offers 13 destinations from the East London airport, Amsterdam, twice daily, said to be most popular.

The airport will very shortly celebrate the one millionth passenger since the new terminal was commissioned last year, an interesting addition being the introduction of a long covered walkway which means that whilst air bridges are not offered the amount of time passengers can be subjected to the elements, very limited.  Alistair Welch, Airport Director, points out that Southend and Stansted have similar train times from London’s Liverpool Street station, but that the fare to his airport is substantially less.  He notes the walking distance from plane to train is much shorter too. www.easyjet.com www.southendairport.com