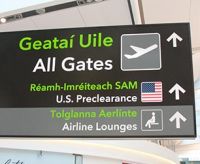 The benefits of US pre-boarding customs and immigration facilities (passengers are treated as domestic upon arrival in the USA) are being seen by Dublin Airport (DAA) with transatlantic traffic up by 11% so far this year.

This figure is likely to increase with the launch last week of an American Airlines’ two-class Boeing 757 daily service to New York’s Kennedy Airport.  The new operation is American’s second route from Dublin, the airline also serving Chicago six times per week from the Irish capital.  Dublin offers 11 destinations to North America this summer.  As well as American, JFK is served twice daily by both Aer Lingus and Delta, and daily United to New York’s alternative airport, Newark.

Dublin Airport’s passenger numbers are up 4% in the first five months of this year, with long haul traffic to North America and the Middle East recording the most robust performance.  The JFK service, which American is operating in conjunction with its Atlantic joint business partners British Airways and Iberia, is one of nine new services from Dublin Airport this year.