Finnair to China and Vietnam 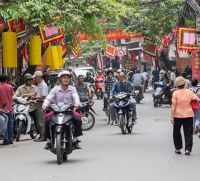 Last week Finnair began flights to Hanoi and Xi’an from its Helsinki hub.  The airline will operate services to both cities three times a week throughout the summer schedule season, until 26 October for Xi’an and 27 October for Hanoi.  Xi’an is now a technology centre but also the home of the Terracotta Army.  Hanoi, in the north of Vietnam, is the country’s capital.

“This route marks an important milestone in Finnair’s 90 years of history, as we build on a legacy of building better connections between Europe and Asia and bring our total number of Asian destinations to 13”, says CEO Pekka Vauramo.  “Strong economic growth in China and Vietnam, combined with a growing appetite for outbound travel from both destinations, are driving our strategic focus on Asian traffic.  There continue to be many exciting opportunities for growth in the East”.

Finnair has gradually built on its Asian strategy during the past two decades, taking advantage of the geographical position of its Helsinki hub on the shortest routes between the great cities of Asia and more than 60 European destinations.  In addition to Xi’an and Hanoi, Finnair operates to Bangkok, Beijing, Chongqing, Delhi, Hong Kong, Nagoya, Osaka, Seoul, Shanghai, Singapore and Tokyo. www.finnair.com