ON TOUR: The Cotswolds 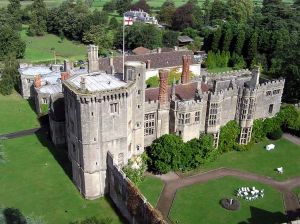 As a base for a weekend break, or longer, the Cotswolds and Gloucester could not be bettered.  That is if you like glorious rolling countryside, narrow lanes with stone walls, and one ancient village after another, each with at least one hostelry.  For the most part the minor roads are quiet and the food and beer normally excellent.  The whole area is a little more than 100 miles from London and easily accessible down the M6 from the north.

AERBT took up National Trust membership (UKP47.50 for 12 months – it pays for itself after five visits) and made use of a free English Heritage guide.  Your Editor based himself at Thornbury Castle, part of the Von Essen Group, now the owners of 26 classic boutique hotels in England, plus one in Scotland (Dalhousie Castle – Edinburgh) and Chateau de Bagnois near Lyon, France.  On this trip we have kept away from Bath, Bristol and Gloucester, each of which is worthy of a visit of several days. 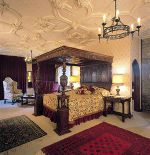 Thornbury Castle is quite unique, the only fortress in the UK that has been converted into a hotel.  It sits on the edge of the little market town of the same name ten miles north of Bristol.  Much of the structure dates back 500 years, but some of it, including several bedrooms, are in fact of very recent construction, only the outer shell going back into history.  You would never know.  No two rooms are alike, all with the heavy fabrics of the 16th century, far removed from the simplistic style now very popular.  That does not mean that it is old fashioned.  Several of the ground floor rooms have what can only be described as ‘walk through’ showers, with no doors at either end.  These rooms are ideal for the less mobile and even has under cover parking attached.  If you are very tall ask for accommodation with an adequate door height.  In times gone by people were generally shorter.  There is a decanter of sherry in every room plus home made biscuits.  www.thornburycastle.co.uk

Berkeley Castle lies midway between Bristol and Gloucester just off the A38 (M5 J13 or 14).  It is the oldest castle to be lived in by the same family for 900 years and it was here that Edward II was murdered.  Berkeley Square in London takes its name from the family as does Berkeley University in America.  The castle is a fascinating tour and includes dungeons, Great Hall, State Apartments and medieval kitchens.  The extensive gardens make for a fine after lunch walk and the adjoining butterfly house and plant centre make for an unusual visit.  Close by the castle is the 18th century Queen Anne style home of the medical researcher Dr Edward Jenner, who discovered the smallpox vaccine. www.berkeley-castle.com

Just south of M4 J18 on the A46 eight miles north of Bath is Dyrham Park (National Trust).  It is set in 274 acres of rolling parkland and beautifully kept ornamental gardens.  The current house dates from the time of William Blathwayt a civil servant who administered the North American colonies and established the government war office in the late 17th century.  Both house and gardens were heavily influenced by Dutch styling, and much of the internal decor and furnishings were also of Dutch origin.  Another Blathwayt 100 years later spent must of his personal fortune rebuilding the property.  What you see today is a genuine large country house of the 1850s complete with a downstairs kitchen area in the middle of the 19th century.  In the 1960s the steep hill leading up from the house was a venue for the RAC hill climb championship.  There is a regular courtesy bus from the large car park to the main property but it is easily walkable although one has to be careful of the deer and cattle which are free to roam anywhere. www.nationaltrust.org.uk/main/w-dyrhampark

Another National Trust property is Newark Park, featured in ‘Tess of the D’Urbevilles’, a Thomas Hardy period piece made for BBC TV.  Perched on a 40ft cliff Newark was built as a hunting lodge and completed around 1550.  In the 18th century the architect James Wyatt made it into a four-square house.  It sits in 700 acres of unspoiled countryside with far-reaching views to the southwest and today is actually the real home of photographer Michael Claydon, one time beau of Joanna Lumley and father of her son.  The interior of Newark is a fascinating mix of period furniture, modern art, and an eccentric jumble of collected artefacts from across the globe.  This is very much a 'lived in' house; here you get none of the sterile feeling that sometimes occurs in stately homes.  The lanes leading to the house are narrow. www.nationaltrust.org.uk/main/w-newarkpark

Tetbury is a typical Cotswolds, retaining its authenticity over the years.  It probably is better known than similar equally delightful settlements due to one particular part-time resident, Prince Charles, whose country retreat at Highgrove lies on the outskirts.  The new Highgrove shop in Long Street, the main thoroughfare, offers a unique collection of organic foods and lifestyle products for the home and garden.  HRH long time interest in nature sets the theme.  However even without the Royal connection Tetbury is a delightful town dominated by the splendid pillared Market House built in 1655.  There are some 25 antique shops, a whole variety of eating places and 19 hotels mostly dating from times before central heating.  The town is without doubt an 'architectural gem' with many of the former wool merchants houses still looking as they did 300 years ago. www.visittetbury.co.uk

Both mining and woollen goods production were important industries in the past leaving such reminders as the Coalpit Heath (closed 1949) near Yate and the Dramway coal mining route to the Avon.  Whilst the wool industry for the most has gone, sheep are still in abundance on the grassy slopes.  The villages and towns that abound have romantic names that live up to the expectations.  Wotton-under-Edge, Chipping Sodbury and Nailsworth conjure up England of the past, timbered houses and stone cottages with streams often running through the middle.

If you are into nature, and particulary if young children are in your party, there are a number of very well recommended sites within the Vale of Severn.  Slimbridge Wetland Centre lies just to the north of Berkeley and was founded by the late Sir Peter Scott, environmental expert.  His father was Captain Robert Scott, of the Antartic. The world famous site is set in 120 acres, superbly laid out and an education on birdlife. www.wwt.org.uk

One word of warning.  Most National Trust properties are closed on Mondays and Tuesdays and do not open until 11:00.  Check the site you want to visit before setting out.  It can be frustrating after driving up a long and narrow country lane to then find the venue closed.  And try to use a map rather than GPS.  Satellite navigation has yet to bring in a system that tells you someone is coming the other way. www.southglos.gov.uk  www.nationaltrust.org.uk