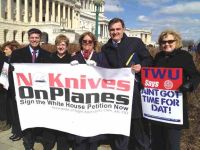 Plans by the US Transport Security Administration (TSA) to permit passengers to carry small knives on aircraft have been dropped after receiving criticism from flight attendants and the public that easing restrictions would increase flight dangers.

TSA head John Pistole, who had proposed to loosen rules put in place in the wake of the September 11 hijackings, told Reuters he had decided to scrap the changes.

Hijackers in the September 11 attacks used small knives to attack crew members and gain control of aircraft.  Cockpits on commercial planes have since been required to have locked doors during flights.

Just days before the rules were due to go into effect, the TSA delayed the change.  Now, six weeks later, Pistole announced that he would scrap the proposed rules altogether.

Flight staff unions, who had mobilised a massive campaign and started a legal battle to keep the knives off aircraft, thanked Pistole for reversing course and for taking time to hear their concerns. www.tsa.gov