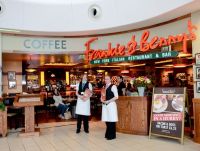 InfraNews, which titles itself “Business Intelligence for the Global Infrastructure Finance Industry” reports that Abertis, the Spanish operator of Luton and Belfast International airports, is in discussion with Aena, also Spanish, and a minority shareholder, to sell its interest.

London Luton Airport Operations Ltd is owned by TBI Plc, the Abertis and Aena partnership.  It recently concluded a deal with the freeholder, Luton Borough Council, which takes its management up to 2031.  In March it sold Cardiff Airport to the Welsh Government.

In January 2013 the airport submitted a scheme to the planning authority (the local Council) for major works including new taxiways and a reconfiguration of the passenger facilities.  This is expected to be approved later in the year.

Luton Airport is very much part of the SE airports controversy (Davies).  A scheme for a second runway was dropped some years back but supporters of the idea have suggested that it is probably the best sited London airport with major trunk roads on either side (M1 and A1) and also sitting between the two existing rail links from London to the north.  It is the UK’s fifth biggest airport with just under 10m passengers last year. www.london-luton.co.uk