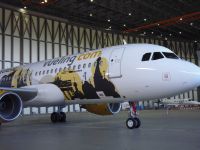 A new look that will help Spain’s Vueling Airlines expand its presence in Europe will start flying aboard on one of its new Airbus A320s throughout its network until December 2013.

Last week at a ceremony in Barcelona, CEO Alex Cruz made known the winner of its ‘Linking Europe’ Competition, run in collaboration with the Fundació Mies van der Rohe.  The team, comprising young architect Plarent Berhamaj and designer Paolo Nazzari, took the accolade for their project “Where do you wanna wake up tomorrow?”

The competition, announced in March, was open to students of architecture, engineering, design and art from more than 800 European universities to celebrate the 25th anniversary of the European Union Contemporary Architecture Prize – Mies van der Rohe Award.  It was created with the objective of supporting talented youths, by offering them the possibility to turn one of their designs into a reality.

Pure European Plarent Berhamaj was born in Lushnje (Albania) in 1987 and earned his degree in 2011 at at Roma Tre University.  Paolo Nazzari is a 24-year-old Rome graduate who took a two-year Master’s degree at the Central St Martins College in London. www.vueling.com