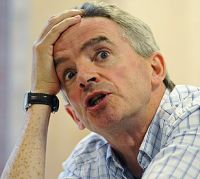 It has not been a good week for Michael O’Leary.  Not only has the UK Competition Commission suggested that he sells/reduces the Ryanair stake in Aer Lingus ((see this issue of BTN)) but he has issued what only can be described as 'a rant' over an Irish Labour Court recommendation designed to end a long-running dispute over a €780m deficit in an existing joint fund, the Irish Airlines Superannuation Scheme.

“How many times are the Board of Aer Lingus going to roll over when their staff and unions threaten industrial action unless they get paid off again and again.  The original pension pay-off of €104m in 2006 was sold to shareholders at the IPO on the basis that Aer Lingus would have no obligation to any future pension deficits.  Now despite paying over €400m to its staff in exceptional payouts over the last six years, yet another €170m to €200m of shareholder funds is to be squandered on paying off a deficit in a DC pension scheme and providing for annual increments which don’t exist in any other privately run company!  We believe this is blatant mismanagement by a Board which is controlled by, and panders to, Government and unions and does nothing to protect shareholder funds”. www.ryanair.com