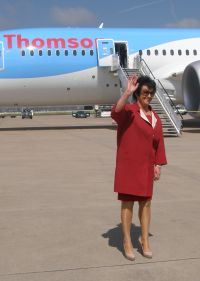 On the same day that it took delivery of its first Boeing 787 Dreamliner ((see in this week’s BTN)) British TUI subsidiary Thomson Airways found itself the recipient of further good news with the announcement by owner TUI Travel that it is to buy 60 Boeing 737 MAX.  The planes, to be powered by CFM LEAP-1B engines, are scheduled for delivery between January 2018 and March 2023.  TUI operates five other European airlines besides Thomson – TUIfly, TUIfly Nordic, ArkeFly, Jetairfly and Corsair – with 141 current aircraft.

TUI says that the 737 MAX aircraft utilises a new technology engine type from CFM which Boeing asserts results in a 13% improvement in fuel efficiency and a 40% noise reduction over today’s main competitors.

The announcement is something of a coup for Boeing who must have been concerned that its long time customer might change to Airbus for its short haul fleet as British Airways and easyJet have done in the past.  (see also ON TOUR 27 May – Thomson Airways – Britain’s First 787 operator) http://flights.thomson.co.uk