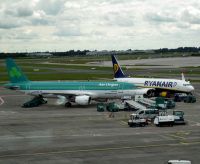 Ryanair has been told to reduce its shareholding in Aer Lingus after the UK Competition Commission (CC) provisionally decided that its 29.8% could reduce competition on routes between Great Britain and the Republic of Ireland.

This is the latest round for an ongoing takeover battle that has been going on since 2006.  Ryanair says it will appeal, another expensive legal battle for the airline, in effect a ‘double whammy’ as it will pay its own expenses, and as a partial owner, some of the Aer Lingus lawyers’ bill.  CEO Michael O’Leary makes the point however that the CC allowed British Airways to take over bmi, substantially reducing UK domestic rivalry.

Summarising its provisional findings the CC has concluded that the shareholding gives Ryanair the ability to influence the commercial policy and strategy of Aer Lingus, its main competitor on these routes.

Simon Polito, CC Deputy Chairman and Chairman of the Ryanair/Aer Lingus inquiry group said: “Passengers on routes between Great Britain and Ireland will benefit from Aer Lingus continuing to compete vigorously with Ryanair and so Aer Lingus needs to be free to take any actions that will strengthen its position in the future”.

The CC is expected to publish its final report by 11 July 2013. www.ryanair.com www.competition-commission.org.uk/media