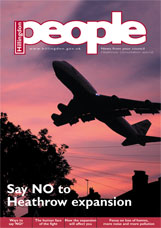 Firstly it has changed its wi-fi supplier to Arqiva and now all users of the airport can log in for a courtesy 45 minutes and those with its (free) Rewards card product are OK for 90 minutes.  After that it is £3 for an extra hour or £5 for three hours.

It also published ‘A quieter Heathrow’, a statement setting out the airport’s promise to reduce aircraft noise while safeguarding the UK’s connectivity.

In the report, Heathrow makes a range of new commitments on noise which include publicly ranking airlines on ‘noise performance’, testing new departure routes with NATS, proposing to trial steeper approaches, establishing a new noise insulation scheme, and proposing a significant increase in fines for airlines that break noise limits.

The report points out that the airport supports more than 100,000 local jobs, a rebuff perhaps to Hillingdon Borough Council who has paid for negative posters on the airport’s Underground stations challenging expansion.

Colin Matthews, CEO of Heathrow, says: “Heathrow is at the forefront of international efforts to tackle aircraft noise and as a result, even though the number of flights has almost doubled since the 1970s, fewer people are affected by noise”. www.heathrowairport.com