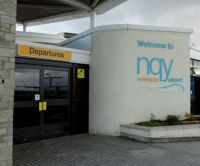 EasyJet is to pay £20m to Flybe for 25 return slots at Gatwick which will help it consolidate its position as the UK’s largest airline in terms of passenger numbers.  The deal becomes effective at the end of March 2014 when that year's summer programme will be introduced.  It requires approval by Flybe’s shareholders who include IAG.  Flybe was a Willie Walsh 15% investment in 2006.

Flybe, originally owned by the Walker family resident in Jersey, floated in 2010 at 295p with the shares standing at 55p on Friday 24 May.

The loss of seven Gatwick routes (see COMMENT above) is already causing concern in Cornwall and Devon where Flybe’s aggressive tactics were said to be the prime cause of the demise of local airline Air South West in July 2011.  With Plymouth 200 miles from London and Cornwall itself much further, air connections with the capital are considered vital for the local economy.

EasyJet has in place its first venture into the region, a Southend three times weekly holiday route starting 22 June.  It is thought to have considered a head on confrontation with Flybe from Gatwick, and will presumably reconsider its strategy for next summer.  www.easyjet.com  www.flybe.com