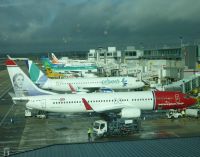 Fuerteventura is the latest destination to be added to Norwegian’s ever-growing route network from Gatwick Airport.

Flights to the popular Spanish Canary Island start on 30 October.  Norwegian will fly twice a week between Gatwick and Fuerteventura.

Norwegian has become a significant player at Gatwick and recently established a UK base at the airport.  The airline currently has three aircraft based at Gatwick and has increased its weekly flights from 198 in 2009 to 320 by the end of the summer.

Apart from popular destinations in the Nordic region, Norwegian offers flights to several popular Mediterranean holiday spots such as Alicante, Barcelona, Malaga and Nice.  The airline also currently offers more than 100 weekly departures between the Nordic region and London.  The British capital is one of Norwegian’s most popular destinations in its route network.  The airline will shortly take delivery of its first Boeing 787 Dreamliner (see BTN 20 May) and is working closely with Virgin Atlantic whose Crawley head office is opposite the Boeing 787-equipped European flight training establishment. www.norwegian.com