Jane Stanbury has been to Lagos. 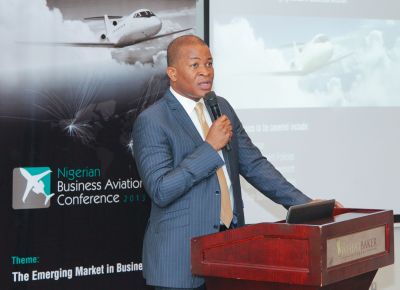 The first week in May saw the inaugural Nigerian Business Aviation Conference (NBAC) take place in Lagos.  It was a home grown occasion organised by Evergreen Apple Nigeria (EAN), the company that opened Lagos airport’s first FBO and full service maintenance facility.  The timing was impeccable as the previous week the federal government released a new National Civil Aviation Policy, which will guide the activities of business aviation.  Some of it contentious, some of it practical, it affirmed the need for discussion and debate within the sector.

Segun Demuren, MD/CEO of EAN, opened the meeting outlining the need for a better local understanding of the value of business aviation in Nigeria as an economic driver for the country and surrounding regions, and confirmed its significance in developing pan-African and international business.  “The business aviation market in Nigeria can only be successful if we have the appropriate infrastructure in place to make it an efficient and valuable business tool”, said Demuren.  “By infrastructure we don’t just mean the physical structures, but also the appropriate aircraft finance, management, safety and permits. 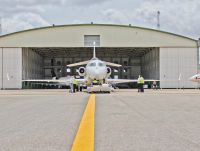 The actual number of jets based in Nigeria is hard to pin point. Data experts JETNET indicate 86, whilst local experts suggest a figure of 150 jets based and operating within Nigeria.  The discrepancy is symptomatic of a young, burgeoning market, but the local figure makes it one of the largest African jet markets.  With a proliferation of large cabin and long range aircraft the value is said to top even the established South African business aviation market in numbers.

As a European attending business aviation conferences that have been fairly down beat it was refreshing to be in an environment that is worrying about the rapid growth of its sector with main concerns relating how to support the aircraft activity.  The Nigerian general aviation industry is expected to grow by about 3.5% over the next year, which follows a 2.5% increase year on year from 2012.

Growth is coming from all sectors of aviation except perhaps the commercial sector, but business aviation in particular booming. Bearing in mind that Europe’s growth is pretty much non-existent this is making Nigeria a hot spot for those looking for new sources of income in business aviation.  Out on the apron at Lagos airport the latest models from the Gulfstream family sit alongside Dassault Falcons, Bombardier Challengers and Global Express types and increasingly the Embraer Legacy and Lineage families.  There is a place for the smaller jets too with over 50 small airports that can serve the turbo prop and light jet community.  With the average aircraft sale said to be around US$25m the international OEMs are optimistic about the future in the country.

The finance session was led by Segun Agbaje, MD of one of Nigeria’s leading financial houses GT Bank, the platinum sponsor of the event, who discussed the requirements of the bank when considering financing aircraft.  Character and integrity of the customer is said to be as important as collateral and assets which is interesting in a country where it is not unusual for clergymen to own executive aircraft.  Agbaje also noted that Nigeria had experienced “high octane growth” in the last few years making for a volatile economic environment but this is not deterring the bank’s  interest in aviation financing.  “We are more used to financing rice and fish so aviation is a good way for us to expand business”, he commented.

The OEM panel which featured sales directors from sponsors Gulfstream, Embraer and Dassault alongside representatives of Bombardier and Cessna in the region were positive and remain optimistic about the future growth of sales in the region giving at least an eight out of ten when asked where on the scale of sales growth they positioned Nigeria.  However the enthusiasm was tempered by the reality that in order to sell aircraft, service centre and maintenance support were major considerations – unsurprisingly as this is also a factor the financiers require. 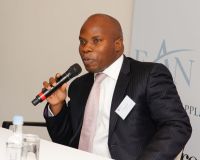 He expressed the need for an increase of aircraft management companies in the region.  Again it is hard to be exact but it seems that very few of the aircraft based in Nigeria are using aircraft management companies to supervise the asset.  An inexperienced team employed by an enthusiastic owner can leave the aircraft exposed in a number of ways.  Management begins three or four months before the aircraft is purchased suggested Ezednagu and advised potential owners to recognise that knowledge of regulations, crewing, paperwork, safety and the capacity to extract value from the asset, will combine to provide valuable support of aircraft operations in a young business aviation sector.

With landing permits currently taking between 48 and 72 hours to be granted, Nnamdi Udoh, MD of the Nigerian Airspace Management Authority, said that a transformation agenda was in process and recognised that automation of this important issue would better serve the industry.  Plans are in place to implement automation sooner rather than later he continued.  Security and safety were also a hot topic with one head of security explaining they have to take as much care of their employees who are regularly threatened as they do of the aircraft and passengers.  FBOs need improving but partnership with internationally recognised, established companies will go some way to supporting development and there is hope that the government will initiate training grants to support all these sectors.

This conference has demonstrated that whilst we have a lot of opportunity we are still very much in our infancy and must aim to build the infrastructure to support business aviation and the associated framework necessary to create a solid base”.