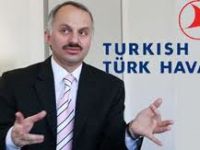 The American educated and fast talking Temil Kotil, Chief Executive of Turkish Airlines, was in London last week promoting his airline.  An engineer by training he joined the airline in 2003 becoming CEO in 2005, became a member of the IATA board in 2006 and is the driving force behind the airline's rapid expansion.

Turkish, a member of the Star Alliance, claims to serve more countries than any other carrier and has outstanding orders for over 200 aircraft, mostly narrow bodies and split between Airbus A320 series (including neo) and Boeing 737MAX.  Long haul the carrier is focussing on the A330 and Boeing 777.  Where the airline goes in respect of A350 and Boeing 787 remains to be seen but Mr Kotil seemed to rule out the A380 “for the time being”.  The airline serves both Heathrow and Gatwick (see BTN 6 May).

Mr Kotil says that the centre of the airline business is moving to the south and east from its traditional centre of gravity mid-Atlantic.  Istanbul currently has two international airports situated on both sides of the Bosphorus.  A contract for a new gateway capable of accommodating up to 150m passengers annually has been recently signed with an opening target date of 2017. www.turkishairlines.com