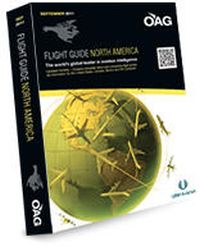 Electra Partners, the London Stock Market listed private equity fund, is the new owner of OAG, often called “engine room of the airline industry”.  The Luton-based company, who as ABC can trace its history back to the early steam railway age, was previously owned by UBM, also a listed company.  In 1993 the then owner of ABC, media conglomerate Reed, made a reverse takeover of OAG, a US-based operation supplying timetable data to the airlines.

Today’s OAG is much more than a timetable operation and describes itself as a supplier of aviation information and analytical services.  It employs around 200 worldwide with about half in the UK and offices in Beijing, Chicago, Miami, Singapore and Tokyo.

Some 950 airlines transmit their schedules data to OAG for distribution, 20% of those sending schedule changes on a daily basis.  This information affects 4,000 airports worldwide.  Every month OAG handles around 20m flight status updates, equivalent to eight messages a second.

Chief Executive of OAG is Phil Callow who joined the business in January 2012 from UBM Medica with John Grant (Executive Vice President), an airline man much involved with Routes and the consultancy ASM (Airport Strategy and Marketing). www.oag.com