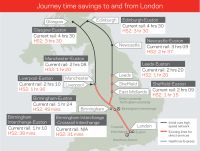 In what was seen by some as a surprise move by the British Coalition Government, the Queen’s Speech last week included legislation paving the way for development of the HS2 train from London to Birmingham.  A bill is proposed that would grant parliamentary permission to build phase one of the line from London to Manchester and the powers to operate it.  Construction on the high speed project, opposed by some residents' groups and councils, is set to begin in 2016/17.  However its passage through Parliament might prove stormy with some rural Conservative MPs very much opposed to its construction.

The Department for Transport says phase one will cut London to Birmingham travel to 49 minutes, from the current one hour and 24 minutes.

The HS2 phase two would virtually halve journey times between Birmingham and Manchester – to 41 minutes – and between London and Manchester from 2hrs 8mins to 1hr 8mins.  With the high speed railway there would be a reconsideration of domestic airline requirements.

A second Bill sets up the financial powers to proceed with a further phase, taking HS2 to Leeds and Manchester.  2026 is suggested as the target for the introduction of services. www.hs2.org.uk