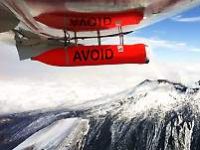 Following its investigation into the effects of volcanic ash (See BTN 12 December 2011) easyJet and its partners Airbus and Nicarnica are planning the final stage of testing of the AVOID technology.

Just to put things in perspective, the 2010 Eyjafjallajökull eruption cost the air transport industry in excess of £1bn.  The seven-day closure of (essentially) European airspace, by politicians on technical advice, caused chaos all around the world.  For easyJet the outlay was £57m.

Last week easyJet flew back a tonne of volcanic ash from Iceland collected by the Institute of Earth Sciences in Reykjavik.  The ash, dried to create the consistency of fine talc, will be used in a unique experiment which is planned for this summer.  The testing will involve two Airbus planes, one of which has the ability to disperse the ash into the atmosphere, thereby creating an artificial ash cloud for a second Airbus test aircraft fitted with the AVOID technology to detect and steer clear of.

Ian Davies, easyJet's Engineering Director, commented: "The threat from Icelandic volcanoes continues and so finalising the approval of the AVOID technology is as crucial now as ever to ensure we never again see the scenes of spring 2010 when all flying ceased for several days. www.easyjet.com