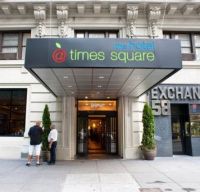 Being New York, it calls itself Broadway @ Times Square but in truth it is a short stroll from where Broadway cuts across 45th Street and is close by the Rockefeller Plaza and Grand Central Station.  Central Park is not far away.

Room rates start from US$224.99 (which equates to under £73 per person per night) plus taxes in May, based on two sharing a queen room.  The price includes complimentary breakfast, wi-fi, daily newspapers and national phone calls.  Children aged 12 and under stay for free.