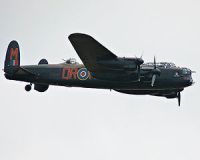 Brooklands Museum is marking the 70th anniversary of the historic 'Bouncing Bomb' raids of May 1943 – and the role played in them by Sir Barnes Wallis and the Vickers Aviation factory at Weybridge – with special events over the next two weekends.

On Sunday 12 May, the Battle of Britain Memorial Flight’s Avro Lancaster bomber will circle above the historic site and a week later on 19 May (the closest weekend date to the actual anniversary of 17 May) the Museum will host a day of celebrations including the chance to meet Veterans of RAF Bomber Command.

Renowned engineer, designer and inventor, Sir Barnes Wallis spent almost four decades working at Brooklands – most notably on the Wellington bomber and the ‘bouncing bomb'.  On 17 May 1943, RAF 617 Squadron left Britain and headed for Germany to carry out Operation ‘Chastise’.  The aim of the mission was to breach the Ruhr Dams that produced much of the power for industry in the region using Wallis’ ‘bouncing bomb’ and these two events will mark the 70th anniversary of those raids.

Brooklands is just south of Weybridge (and its railway station) close by the M25. www.brooklandsmuseum.com