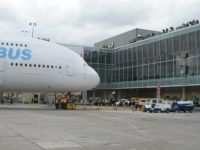 Load factor grew by 2.4 percentage points to 71.9%, while the average number of seats per plane jumped to 199.9 from 195.5.  With the introduction of more and more A380s replacing smaller (and noisier) aircraft 2013 is likely to be a record year.

“What we are seeing over recent months are bigger and fuller aircraft”, Jose Leo, Heathrow’s Chief Financial Officer, said in an interview.  “Fuller aircraft means the airlines are managing their operations more efficiently and load factors are growing very significantly”, he said.  “The average number of seats per aircraft is going up”.

The airport still managed to make a loss although it declined by almost £40m to £196m and the company retains a core debt of over £10bn despite it falling 7% after the sale of Stansted Airport.

On Tuesday (30 April) the CAA is due to publish a paper on the future of airport regulations for London.  It is bound to be controversial with Gatwick Airport (and presumably Stansted too), wanting the authority to remove the shackles regarding competition and passenger charges. www.heathrowairport.com