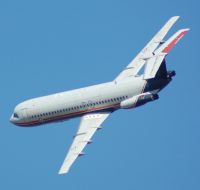 Conceived in the late 1950s and first flown in 1963, the 1-11 was ahead of the DC9 (Boeing 717) and Boeing 737 at its time in the race to develop a short haul jet liner to replace the successful Vickers Viscount.  Selling in reasonable numbers for the period (244 built) it became the mainstay of the British Airways (initially BEA) regional fleet, sold in America, and was also built in Romania.

The plane at Classic Air Force has an interesting history.  One of the last Hurn-built 1-11s it joined British Airways (as G-BGKE) and in 1991 became part of the small Defence Research Agency fleet.  It gained the military registration ZH763 and served at Thurleigh, Farnborough and Boscombe Down – the home of British military aircraft evaluation and test flying since 1939 – as a flying laboratory, primarily for radar trials.

On Tuesday (30 April) the world’s oldest flying twin jet, a Gloster Meteor built in 1949, is due to fly down to Newquay from its current home at Coventry Airport. www.classicairforce.com