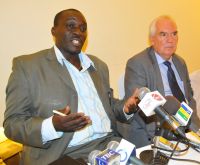 Fastjet, which likes to call itself a Pan African airline, plans to introduce a Cape Town – Johannesburg route as early as 31 May.  Based in Dar es Salaam (Tanzania), but London centred airline the airline began operations in November 2012 (taking over Fly540) and whilst it currently only operates three A319s it has ambitious plans.  The move will shake up the air transport world within South Africa.

Currently Cape Town – Johannesburg is a monopoly operated by South African Airways and its subsidiary Mango Airlines which was founded in 2006.  Presently up to 25 flights daily in both directions are scheduled for the 2hrs 10mins sector.  All are flown by Boeing 737s, single or two-class depending on the airline.

Commenting on the announcement, fastjet Chief Executive Ed Winter, said: “fastjet sees a strategic gap in the South African marketplace for a pan-continental, low-cost airline operating the yield management model required to keep fares affordable for passengers, not just at launch, but also in the long term”. www.fastjet.com