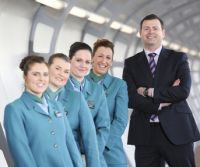 Aer Lingus Regional, operated by Aer Arann, will move all services at Dublin Airport to Terminal 2 on 1 May.  The flights involved are to and from Birmingham, Edinburgh, Manchester and Southend.

Simon Fagan, Chief Commercial Officer at Aer Arann, said:  “For Aer Arann, the move to Terminal 2 is a significant step in advancing our ‘new beginning’ strategy, which aims to position the airline among Europe’s top tier of regional airlines”. www.aerarann.com