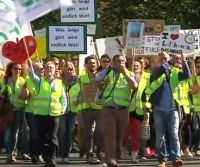 Travellers on Lufthansa have been put in an awkward position with the airline’s main trade union on strike today (Monday 22 April) at very short notice.

The Verdi union, representing thousands of staff at the airline, rejected as "unacceptable" an offer for wage increases from the company.

Lufthansa offered to increase salaries by 1.2% from October 2013 and a further 0.5% a year later, in a deal that would run for 29 months and would not contain job guarantees, a spokeswoman for Verdi noted.

Lufthansa said that it had offered to increase salaries in two steps in a deal that would last from February this year to June 2015, giving total increases of between 1.7% and 2.3% depending on the division an employee worked in.  Staff have already held a one-day strike on 21 March, forcing Lufthansa to cancel nearly 40% of flights.

Lufthansa, Europe's biggest airline by revenue, is cutting 3,500 jobs, revamping low-cost carrier Germanwings and bundling procurement for its airlines as it seeks to cut costs and improve earnings. www.lufthansa.com