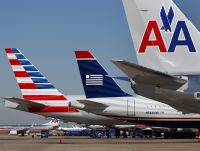 One of America’s lowest profile airlines, US Airways, is the latest arrival at Heathrow, dropping its Charlotte, North Carolina, daily flight to Gatwick and relocating the service to T1, as of today (1 April).  The airline, currently negotiating the takeover of American Airlines, is already established at Heathrow with a daily Philadelphia flight.  It also has a daily Manchester – Philadelphia operation.

All flights out of the United Kingdom are operated by Airbus A330 aircraft with a two-class cabin layout.

The current US Airways is very much the result of a reverse takeover by the low-cost domestic carrier America West in 2005.  It is still based in the old America West headquarters at Tempe, Arizona, but this will probably change if the American Airlines buyout goes through, expected in the third quarter of this year.  The new American Airlines, by then the world’s largest air carrier, will still be based at Dallas Fort Worth.  It will remain part of oneworld although currently with Star Alliance.

One casualty of the merger might be the new American Airlines colour scheme (seen here).  It appears that the incoming CEO, Don Parker, formerly of US Airways/America West, is not that much in favour. www.usairways.com