Heathrow is being caught 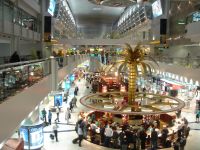 Dubai International has been confirmed as the world’s second busiest airport for international passenger traffic, moving ahead of Paris Charles de Gaulle airport for the first time.

Since the start of the year Dubai International has moved up two positions in the global rankings and now has Heathrow’s title as the world’s busiest international airport firmly within its sights. The move up the rankings was confirmed by the latest figures published by Airports Council International.

“It is extremely gratifying to see Dubai International leap up two places in the international passenger rankings in a single year.  It is a clear signal that more people are choosing Dubai as their preferred hub not only for its extensive global network but the superb facilities on the ground too”, said Dubai Airport’s CEO, Paul Griffiths.

“Given our surging growth rate and London Heathrow’s capacity constraints we are well placed to overtake them as the world’s busiest airport for international traffic by 2015”. www.dubaiairport.com