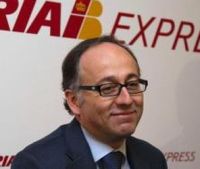 Following an agreement between some Iberia staff and IAG over job cuts Rafael Sanchez Lozano, Iberia’s CEO, has stepped down “by mutual consent” replaced by Luis Gallego, previously head of Iberia Express, and before that Chief Operating Officer at Vueling.

In the meantime IAG, a management operation based at ever expanding offices on the north side of Heathrow, has made another approach for Vueling, valuing it at a further 32% per share and now saying that it needs only 14% more shares to take it over the 50% threshold.  Previously a 90% holding was demanded.  This new bid could possibly cost less than the original offer.

Vueling continues to prosper with a whole series of new routes introduced at the start of the summer season. www.btnews.co.uk/article/5728  Reports indicate good forward bookings.  In Washington last week it took the prestigious Air Transport World (ATW) “Value Airline of the Year” award.  IAG says that if the bid goes through Vueling will be run as a ‘stand alone’ airline. www.iairgroup.com  www.vueling.com