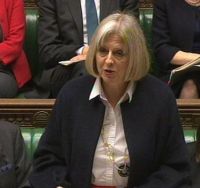 The UK Border Agency (UKBA) is to be abolished with its work returning to the Home Office, Home Secretary Theresa May has announced.  She told the House of Commons "its performance was not good enough".  It will now be split into parts, one focusing on the visa system and the other on immigration law enforcement.  The same staff will be retained.

In what is becoming a saga, last year Mrs May announced that the border staff – responsible for day-to-day operations – would stop being part of the Agency and become a separate law-enforcement body.

She told MPs that the improvement in performance of the border controls since the split showed the benefits of having smaller, more focused structures. "But the performance of what remains of UKBA is still not good enough.  The Agency struggles with the volume of its casework, which has led to historical backlogs running into the hundreds of thousands.”

Mrs May said: "UKBA was given agency status in order to keep its work at an arm's length from ministers.  That was wrong.  It created a closed, secretive and defensive culture".

Business Travel News has passed the border controls several times in recent weeks at Gatwick and Heathrow and reports it quick and pleasant.  www.ukba.homeoffice.gov.uk