There were a number of major talking points at the very successful Telegraph Cruise Show, held once again at London’s Olympia last weekend (23-24 March).

For the public the highlights were easy.  The promotion of the imminent arrival of two major new cruise ships, more or less competing head on, NCL Breakaway and Royal Princess, large, but not the biggest ships available and both with plenty of innovations and novelties. 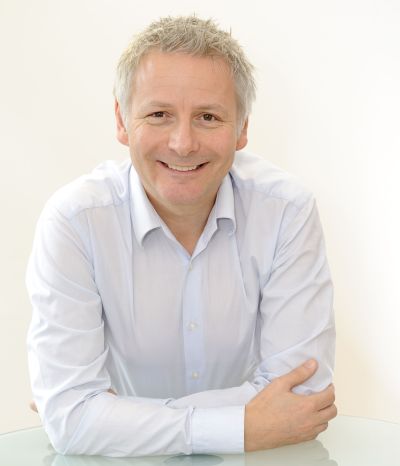 For the trade the retirement of Bill Gibbons as Director of the Passenger Shipping Association and with it the integration of that well named body into the CLIA (Cruise Lines International Association) UK & Ireland, part of a multi-national organisation tasked with representing the cruise industry to the consumer and the legislator.  In charge will be the popular figure of Andy Harmer, well known in the industry and presently head of the Association of Cruise Experts,  which is also rolled into the new grouping

The most substantial increase in capacity has come in the south coast ports of Southampton, Dover and most recently, Portsmouth.  The growth in popularity of ex-UK cruises can largely be attributed to the ease of access to the ships.  Besides southern England Southampton Airport is connected to most northern regional centres and with Portsmouth the motorway extension virtually reaches the dock  for those living in the south.  Dover now has the high speed Javelin service from St Pancras with both Kings Cross and Euston nearby.

2012 also saw more British passengers taking an ocean cruise holiday than ever before, 1.7m  The figure is indicative of the loyalty of the clientele, given the challenging nature of the year which opened with the Concordia tragedy and saw the UK economy dip back into recession.  Cruise continues to account for one in every eight of all overseas package holidays.

As in previous years the most popular destination was the Mediterranean, which saw 698,000 Brits visiting the region.  However the noticeable trend was increased appetite for cruising to Northern Europe which experienced a  29% upsurge to 443,000.  The Norwegian fjords figure of nearly 200,000 was 44.5% of the Northern European bookings.

Continued growth was also seen in ‘ultra luxury’ cruising.  Generally with smaller 5-star ships these only represent 1.7% of the market but the growth was 10%, and during the summer 30%.  www.cruising.org 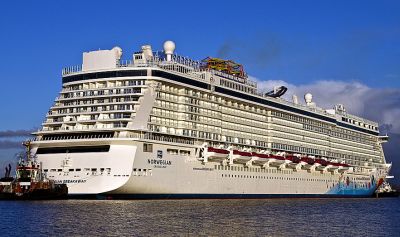 NORWEGIAN BREAKWAY debuts at Southampton on 29 April.  155,000 tons and 4,000 passengers.  She is then off to New York for a summer season based at the Manhattan Passenger Ship Terminal making 7-day cruises to Bermuda (May thru Sept) and weekly trips to the Bahamas & Florida (October thru April).  She will be the largest cruise ship to sail from New York City.

There is one aspect of Southampton that will be very familiar to NCL maiden voyage regulars.  In charge of all the public areas will be Klaus Lugmaier, the genial Austrian Hotel Director, seamlessly making sure that everything is OK.

The company tantalisingly revealed the ship's groundbreaking design over the last few months, including The Waterfront and 678 Ocean Place; a wide range of indoor and outdoor venues on three decks that will create a whole new complex at sea enhancing the guests' connection with the ocean.  Norwegian Breakaway's entertainment will include three Broadway shows: five-time Tony nominated “Rock of Ages”, the dance sensation “Burn the Floor” and “Cirque Dreams & Dinner Jungle Fantasy.  The famed comedy troupe The Second City, Howl at the Moon, Duelling Pianos, and New York's own Slam Allen will perform on the vessel.  Celebrity Chef and Food Network star Geoffrey Zakarian will also debut his first restaurant at sea on Norwegian Breakaway: Ocean Blue by Geoffrey Zakarian.

The top decks of Norwegian Breakaway will feature the first Aqua Park at sea with five full-size water slides, including twin Free Fall slides, the first ever at sea, and a three-storey sports complex that includes the largest ropes course at sea, a nine-hole miniature golf course, basketball court, rock climbing wall and more.

The ship will also feature a rich mix of stateroom options including The Haven by Norwegian, comprised of 42 Suites at the top of the ship and 18 additional Suites located throughout the ship; the innovative Studios, designed and priced for solo travellers; the re-introduction of Oceanview staterooms, Balcony and Mini-Suites; along with Spa Balcony, Mini-Suites and Suites in close proximity to the spa.

What is remarkable about this ship, and true of most cruising, is that for the most part the facilities and entertainment are all inclusive.  Pay your tips beforehand and you need not spend an extra penny.

Business Travel News will be reporting on Breakaway in our May cruising issue.  www.uk.ncl.com 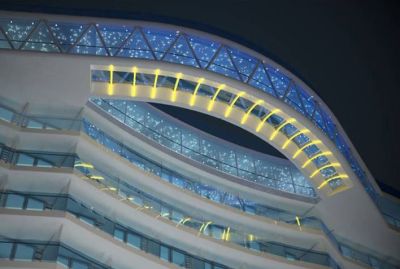 ROYAL PRINCESS at 140,000 tons is the largest ever ship by Princess Cruises and the third to bear the name.  Princess Cruises also takes in Cunard, P&O and Holland America and others in the Carnival Group.  She will be visiting Southampton 9 June direct from her Italian builders; will then make a short shake-down passage to Guernsey before departing 16 June for Barcelona and a series of Mediterranean cruises.  She crosses the Atlantic in October for a winter programme based in Ft Lauderdale.

Among the special features found on board will be a greatly expanded atrium, the social hub of the ship; a dramatic over-water SeaWalk, a top-deck glass-bottomed walkway extending more than 28 feet beyond the edge of the vessel; plush private poolside cabanas that appear to be floating on the water; the new Princess Live! television studio; a pastry shop; a special Chef’s Table Lumiere, a private dining experience that surrounds diners in a curtain of light; and balconies on all outside staterooms.  The live entertainment programme looks good too and the ship will feature the latest “Movies Under the Stars” with Hollywood’s latest.  www.princess.com/royalprincess

Celebrity Cruises has announced its European sailings for 2014 with six ships sailing in the region, including two from the UK.  Guests can choose from 12 brand new itineraries including new seven-night sailings taking in Mediterranean gems from Barcelona to Venice, 12- and 13-night Classical Mediterranean cruises and 13-night Istanbul overnight sailings. 2014 will also include calls at 102 ports in 30 countries with five new ports of call – Zadar (Croatia), Porto Torres (Sardinia, Italy), Almeria (Spain), Sochi (Russia) and Lerwick (Shetland, Scotland). The 2014 sailings will go on sale on 27 March 2013. www.celebritycruises.co.uk

P&O for the first time ever will be offering fly/cruises in the Mediterranean with Ventura, sailing round Italy from Venice to Savona and back to Venice, taking in Croatia, Greece, Corsica and Montenegro.  A choice of seven and 14-night holidays in the Mediterranean will be available until October exploring the region’s iconic cities including Rome, Venice, Naples, Dubrovnik and Florence, as well as other smaller destinations including Kotor and Ajaccio. www.pocruises.com

Star Clippers’ classic tall ships, Royal Clipper – the line’s flagship – and Star Flyer recently underwent refurbishments to replace all of the soft furnishings and give the vessels a renewed look.

The 227-passenger Royal Clipper underwent a two-week dry dock in Trinidad in January, during which the elegant dining room received new carpeting and seating upholstery and the corridors received new carpet.  Guest cabins were given an update with new paint and a bathroom rejuvenation.  Wood panelling and accents in the public areas were treated to a fresh coat of varnish.

The 170-passenger Star Flyer has also undertaken a dry dock in which the ship’s soft furnishings were replaced, including new carpet in most public areas and new seating cushions the dining room and library.  All of the cabins and public areas received fresh paint and new artwork in the nautical theme that is found in the décor throughout the vessel.

Royal Clipper will be sailing in the Mediterranean this summer and Star Flyer in the Baltic. www.starclippercruises.co.uk

The American Queen paddlewheel steamboat last year returned to the Great Lakes region to take guests once more on steam boating adventures.  It is the only authentic paddlewheel steamboat in the US and offers all the adventures and amenities that have made steam boating such a cherished American tradition – the history and heritage, the warm ambiance of a floating antebellum mansion, the thrill of exploring Mark Twain’s America, the succulent dining, the showboat-style entertainment and dancing the night away to the sounds of swing, big band, New Orleans Jazz and Delta Blues music, and live storytelling by regional authors, historians and performers.

This year there are a number of new features to make steam boating holidays better value than ever before. For example, a deluxe hotel night ashore, select shore excursions and an alternate dining venue on board are all now included in the price of your voyage. There are also complimentary soft drinks, bottled water, and wines and beers at dinner. www.americanqueensteamboatcompany.com