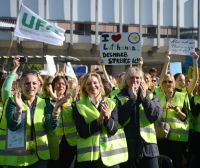 Prospective Lufthansa passengers should be careful in watching the airline’s web site as the carrier had to cancel almost 700 flights as workers went on strike early on Thursday (21 March).  Only announced the day before, and ended as planned at 10:00 local time, the action proved to be extremely disruptive wiping out domestic and European flights by Lufthansa into the afternoon.  Some 40% of the day’s flights were cancelled.

"We see this strike as disproportionate at this time.  Talks are scheduled for tomorrow (Friday), and the exchange of demands has only just started", a spokesman for Lufthansa said.

Verdi, the largest trade union involved, said that its members would not walk out over the Easter holiday period.

In negotiations that started last month, Verdi is demanding a 5.2% increase in wages for 12 months for 33,000 employees at Lufthansa Cargo, Lufthansa Technik, Lufthansa Systems, catering unit LSG Sky Chefs and ground crews. It also wants a commitment by Lufthansa to safeguard jobs.

Lufthansa has said it wants to freeze pay and ask employees to work one hour more each week to help it to remain competitive in a tough market citing Middle East airlines as very aggressive. www.lufthansa.com