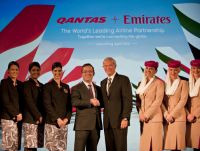 Next Sunday (31 March) the Qantas A380 QF1 service will come into Heathrow T3 from Singapore as usual, turn around and depart as the QF2, but to Dubai, bringing to an end the long standing British Airways – Qantas arrangement on what is affectionately known as “The Kangaroo Route”.

Times move on and Qantas has a new partner from the moment the flight departs, Emirates, perhaps the most aggressive airline in the world these days.

Time wise to and from Australia there is little to choose between flying via Dubai and a host of other centres (on average about 23hrs) but travellers on this route will have the benefits of the new A380 purpose built Concourse A at Dubai, and the choice of connecting to the many destinations that Emirates offer from the airport.

Under the new arrangements, from 31 March, Qantas Club Members will be welcomed at the Emirates Business Lounge in Dubai when their next onwards flight that day is with Qantas or Emirates.  When travelling from London, access for Qantas Club Members to the British Airways Terrace, Executive and Galleries Lounges will be replaced by American Airlines Admirals Lounge at Heathrow T3. www.qantas.com