There is one truly European city that is still not within the scope of the budget airlines and is poorly supported, by which I mean only daily, by British Airways.  In fact it is unfair to blame BA for the lack of flights as with demand they would surely improve their schedule. 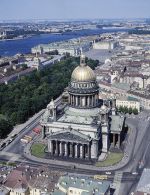 The problem is Russia, described by Winston Churchill over 60 years ago as an “enigma within an enigma”.  Nothing has changed.  Most foreign citizens need a visa to visit the country.  It is a bit of a rigmarole and costs in the region of UKP100, of which the state only gets UKP25, the rest going to "administration".  Many more would visit if the travel rules were loosened.  St Petersburg has far more to offer than Dubai but the Emirates open-gate philosophy makes it an attractive proposition.  Mind you it rains more in Russia’s one time capital.

The St Petersburg of today dates from 1702, making it younger than New York.  It has been rightly described as “The Venice of the North” and is truly one of the great cities of the world.  It was conceived by Peter the Great as the gateway to Europe for Russia.  As a young man he had travelled far, even allegedly working as a shipwright on the Thames at Deptford, and it was his vision that laid out the magnificent city that one sees today.

It is (very) cold in winter

St Petersburg sits on a narrow isthmus linking the Scandinavian seas and Europe’s largest fresh water expanse, Lake Ladoga, as large as Switzerland.  Built on marshland some 40,000 Swedes toiled under terrible conditions constructing bridges, canals, palaces and fortifications.  St Petersburg can be very cold in the winter, the water frozen over.  It is temperate in summer, but also likened to Manchester due to the rain.  Probably the best time for a visit is for the ‘White Nights’ from the end of May until early July.  During this period It does not get dark until after midnight.

What is today St Petersburg has had a variety of names.  It was initially called Petropo, then Pieterburgh and up until 1914 Saint Peterburg (no S).  It then became Petrograd but after Lenin’s death in 1924 it was renamed in his honour, Leningrad.  The current name was adopted in 1991, still without the S in Russian.  The 900-day Siege of Leningrad from 1941 until 1943 by the Nazis still arouses debate, Victory Square, on the Metro in the suburbs, an outstanding memorial to the one million plus casualties.

Just to bring readers up to date with current Russian thinking, the victory of the Reds over the Whites in 1921 is now named the Civil War.  The Second World War in Russian terms is called the Great Patriotic War 1941-1945.  Communist times are now called the Soviet Era, and Mikhail Gorbachev, who effectively broke up the USSR, is both loved and hated.  At one time his rating was less then 5% but it seems to have returned to something like equilibrium.  The Russia of current President Dmitry Medvedev seems clean, friendly and safe.  The precautions you take in the cities are the same as anywhere in the world.  The Russians moan about money but certainly the ‘haves’ to have a good standard of living, the shops busy.  Tomatoes in a supermarket came from California.

Stay in central St Petersburg.  It is very walkable and not an expensive city.  A fine Metro system makes travel easy, the décor in some stations are on the tourist must visit list.  The five-star Rocco Forte Astoria is outstanding and very well positioned for most of the sites.  The Corinthia Nevskij Palace has just completed an extensive remodelling.  Brand new is a Holiday Inn with more than 500 guestrooms.

Start at the Hermitage 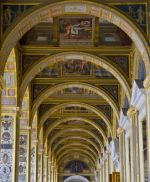 Where to start in St Petersburg?  That is easy.  The Hermitage, created around the Winter Palace of Elizabeth, Empress of Russia and daughter of Peter.  It was here in 1917 that the Romanovs were deposed.  Today it is probably the world’s greatest historical museum and worth an article (several articles) of its own.  Catherine the Great’s art collection includes the works of da Vinci, Michelangelo and Rubens.  Under the Soviets the collection was expanded with works by Cezanne, van Gough and Picasso.  There is the ballroom, throne room and concert hall to view, in all over one thousand rooms.  Allow a day and walk quickly for an overview. 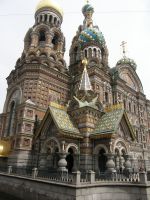 Russia for the tourist has been called the land of ABC (another bloody church) and there are a great many of them.  Be selective.  St Isaac’s Cathedral is the largest in the city and took 40 years to build.  In recent times it has regained its ecclesiastic status.  For those with the strength the climb to the high observation platform of the Colonnade is 300 steps, but worth it.  Another worth a visit is the Church of the Spilled Blood, site of the assassination of Alexander II, perhaps Russia’s most enlightened monarch.  Today it is the Museum of the Mosaic. 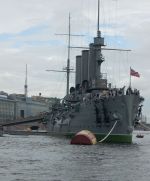 A canal trip is recommended.  You will pass one palace after another including that of Count Stroganoff, a man who gave his name to a style of cuisine.  The cruiser Aurora is a memorial to the 1917 revolution and the Peter and Paul Fortress is the original fort of Peter I.  All of them are best seen on foot, but it is time consuming.

Through the centuries music and dance has played an important part of the Russian social scene.  Even if you are not into ballet don’t miss out.  The magnificent Mariinsky Theatre is where many of the masterpieces of Tchaikovsky, Khachaturian and Rimsky-Korsakov received their premieres.  But in St Petersburg you are spoilt for choice by theatre and performance.  They are all good.

Another water trip is to Peterhof Palace ‘Versailles by the Sea’ with its wonderful parkland and waterfalls plus room after room of sheer opulence.  The little town of Pushkin is the home of Catherine’s Palace, severely damaged during the Leningrad siege, its restoration during the Stalin years, said to be the finest replica in the world.  The façade is nearly one thousand feet long.  Catherine was born a minor German princess, married a grandson of Peter the Great, and is reputed to have been involved with his murder.  Although she had numerous affairs she never married again.

On a quiet stretch of the Moika River stands a long yellow building, which was once the residence of the wealthy and respected Yusupov family (and named after them) which saw one of the most dramatic episodes in Russia's history – the murder of Grigory Rasputin in 1916.  Whether he had hypnotic powers is debated to this day, but whatever his skills were they did him no good.  He finished up in the river!

If you think of the yachts and play things of the current bunch of Russian oligarchs nothing has really changed over the years.  The rich get very rich and the poor, poorer.  The rest of us somehow fit in.  The wealth of three centuries is unbelievable but it is on view for all to see.  Expect to come back tired.