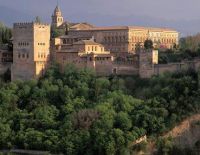 British Airways continues to expand at London City Airport (LCY) as it celebrates 10 years at the airport with a grand party later this week.  Granada is its latest destination and will be the only airline operating from the UK to one of the most historic parts of Spain.  The year-round four days a week service will launch on 25 July just before the start of the busy summer season.  They are operated by a two-class 98-seat Embraer 190 offering complimentary food and drink on board.

Also served in mainland Spain from LCY by British Airways is Barcelona, Madrid and Malaga, which complements the Granada flights and goes up to six rotations per week from the same date.

The Granada region is one of the most important areas of great historical interest and is home to the famous Alhambra Palace, the most visited monument in Spain.

Situated at the foot of the Sierra Nevada mountains, Granada is an excellent year-round leisure destination.  It is very close to the Sierra Nevada Ski Station where the 1996 World Alpine Ski Championships were held, and is just an hour from the Mediterranean coast. www.ba.com