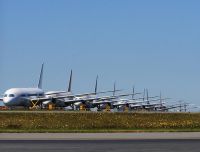 Boeing says that the re-introduction of the 787 is now not very far away.  Seattle is introducing what it calls a comprehensive set of improvements that will add several layers of additional safety features to the lithium-ion batteries on the Dreamliner and could be ready for initial installation within the next few weeks.

These improvements, which continue to undergo extensive certification testing, will allow operators to resume commercial flights as soon as testing is complete and the FAA and other international regulators grant their final approval.

Boeing Commercial Airplanes President and CEO Ray Conner was emphatic. "Passengers can be assured that we have completed a thorough review of the battery system and made numerous improvements that we believe will make it a safer, more reliable battery system."  Battery system changes include changes to the battery itself, the battery charging unit and the battery installation.

Last week the FAA approved Boeing's certification plan, which lays out the discrete testing to be done to demonstrate that the battery improvements address the conditions laid out in the Airworthiness Directive that has suspended 787 commercial operations. www.boeing.com/commercial