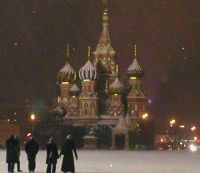 Today (18 March) easyJet introduces a new service (twice daily from 15 April) from Gatwick to Moscow’s Domodedovo Airport, a route won after a hard fought battle with Virgin Atlantic and to a lesser extent British Airways.  It is easily the highest profile air route launch this year, justified with the carrier graduating into the FT100.  On 28 March Manchester starts on an initial four times a week basis to Moscow.

Gatwick flight time is 3hrs 50mins with a 180-seat Airbus A320.  easyJet is rumoured to be selling real Russian vodka on board.  We shall wait and see.

The airline says it has been surprised with the take up from Russia, not known as an internet savvy country, bookings now split 50/50 between the UK and the Russian Federation.

EasyJet will be the only one class operator on the route, and also the only one from Gatwick.  Heathrow is served by Aeroflot (to Sheremetyevo), British Airways (Domodedovo) and also Transaero Airlines whose two flights are split, one to Domodedovo, now Moscow’s main airport, and one to Vnukovo, mainly domestic but expanding.  Sheremetyevo, once the leading Moscow Airport, is the home for Skyteam operators. www.easyjet.com