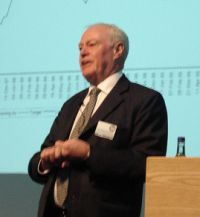 Former BA Chief Concorde pilot Jock Lowe has gone public with his idea to double the length of the present Heathrow runways, saying that he was “frustrated” with the way things were going regarding suggestions to deal with the capacity problems.  “When we started hearing about all these various ideas, I thought this is just getting really rather silly”, said Mr Lowe.

Under Captain Lowe’s scheme aircraft would land on the first half of the extended runways and take off on the second part.  The separation would be the same as the present run-off area, if not greater.  Captain Lowe has discussed his plans with Business Travel News, and they formed an essential part of a Financial Times feature article (Monday 11 March).

In theory at any rate this could double Heathrow’s movements and with the trend to larger aircraft increase passenger numbers to past 150m.

Captain Lowe is working with Mark Bostock, a former Director at the engineers Arup, who has developed a plan for a new railway station at Heathrow that could also serve as an airport terminal.  Lines to the west and Crossrail would be integrated into the scheme.  He says that his plan is quicker and cheaper than alternatives.  And better. www.ft.com