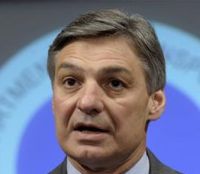 Last Monday’s appearance by Boeing Commercial President and CEO Ray Conner at the J. P. Morgan Aviation, Transportation & Defense Conference in New York last week (see BTN 4 March 2013) proved to be a damp squib regarding the grounded 787.  He does not know when the Dreamliner will be back in airline service and in the meantime aircraft are coming down the two lines at Seattle and Charleston at a rate of five a month, soon to be increased to seven.

In the meantime the US National Transport Safety Board (NTSB) released on Thursday (7 March) hundreds of pages of details from its investigation into the battery fires that have kept the planes out of the air.  Lots of paper but no explanation.  However it did say that it would hold a public hearing in April on the design and certification of the Boeing 787 battery system and a forum on lithium-ion battery technology in general the same month.

"The information developed through the upcoming forum and the hearing will help the NTSB and the entire transportation community better understand the risks and benefits associated with lithium batteries, and illuminate how manufacturers and regulators evaluate the safety of new technology", NTSB Chairman Deborah Hersman said in a statement. www.boeing.com/commercial