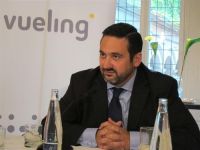 International Airlines Group said that it was considering its options over its proposed takeover of Vueling after the Spanish budget airline recommended shareholders reject an IAG's offer for the balance of the shares.

The board of Vueling said on Thursday that IAG's €7 per share bid did not reflect the airline's true value.

"We will reflect on Vueling's announcement and provide an update in due course," an IAG spokeswoman said on Friday.

IAG, which already owns 46% of Vueling as well as British Airways and Iberia, offered in November to buy the rest of Barcelona-based Vueling in a bid to stem its losses in Spain and shake up its short haul business.

The offer represented a 28% premium at the time, but Vueling's share price has since soared as the low-cost carrier's market share in Spain has grown and it posted a 300% jump in 2012 net profit.

Vueling shareholders have until 8 April to say whether they will accept the offer. www.vueling.com