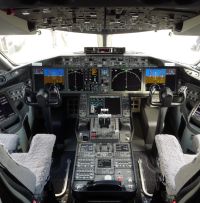 The knock-on consequences of the Boeing 787 grounding are now being seen around the world as airlines take on board some of the problems.  For cabin staff it is fairly easy, and a very quick retraining programme organised back to the previous aircraft.  For pilots the problems are much deeper although there is some commonality with the 777 the expense of changing a current type rating is quite high.  The 787 has a very advanced electronic Collins avionic suite.  Will the airlines then have too many 777 flight deck crew?

In Japan the 350 or so pilots, at All Nippon Airways (ANA) and Japan Airlines (JAL), who operate around half the 50 787s delivered have been at home since the planes were idled in mid-January – an enforced rest period not welcomed by crew or company.

Without planes to fly, the pilots – who have had up to three months training for the 787 – expect their monthly pay to fall by as much as 30%.  ANA has told its 787 pilots they will undergo simulator refresher training next month.  But on what type? www.boeing.com/commercial