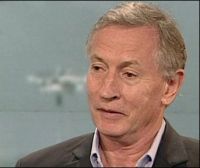 The last SOAPBOX for 2012 (issue 3 December) featured Mike Ambrose as he retired from a 20-year plus tenure at Director General of European Regions Airline Association (ERA).  Virtually running parallel with Mike at ERA has been Steve Ridgway at Virgin Atlantic whose reign at the airline was completed at the end of last month.

Steve (61) comes from the far South West with boating in his blood, and it was as Project Head and Chief Pilot of Cougar Marine, who built the Virgin Atlantic Challengers, that he first met the then Richard Branson.  He joined Virgin Atlantic in 1989 and became Chief Executive in 2001. He is much involved with the St Moritz Hotel, Trebetherick, Cornwall.

The following is taken from a speech he made at the London Aviation Club 7 February 2013.

First of all, I’d like to take you back to 22 June 1984.  Many of you will remember that summer: Frankie Goes to Hollywood in the charts; McEnroe and Navratilova both preparing to win Wimbledon yet again; the England football team have again failed to qualify for the European Championships…

"Our industry looked very different.  British Airways, Heathrow, Gatwick and other major airports are still in public ownership.  Pan Am, BCal and Dan Air are still alive and well.  easyJet is just a twinkle in Stelios’ eye and Michael O’Leary is training to be an accountant in Dublin.  And Airbus wasn’t anything like the business it is now.

The “like it or lump it” approach to customer service is the norm and long-haul travel is for rich people only.

And along comes Richard Branson with a new airline.

He was very clear about the kind of airline he wanted to create.  Challenging, innovative, differentiated and – most importantly of all – focused on the customer.  It had to be different.  That difference in everything we did.  People, crew, product – such as our Upper Class, a first class product at a business class fare – and Premium Economy, which introduced a whole new concept to the industry.  Limos, individual seat back inflight entertainment in all cabins.

Not to mention drive-thru check-in, an idea we stole from McDonalds!  Also a world’s first biofuel demo flights.

We have kept the great stories coming – this is very powerful for our staff, our suppliers and above all for our customers.  It has also been a great PR tool.

I’m very pleased that the company remains very energised despite a tough decade for the industry and tough trading conditions.

We’ve just completed a big investment programme, refreshing our fleet of B747s at Gatwick.  We have a new fleet of A330s.  We will deliver good, strong competition for BA on domestic routes, thanks to the remedy slots arising from that airline’s takeover of bmi.  Before Christmas we announced a deal with Delta: they will take over Singapore Airlines' shareholding in Virgin Atlantic and we’ll be entering into a transatlantic joint venture with them, once approved by the regulators.

It has been a seminal few months for the airline – on 9 Dec we were operating to around 30 long haul destinations; with the remedy slots we added domestic routes; just a couple of days later we announced a transformational change through our partnership with Delta.  Virgin Atlantic also has a new CEO – congratulations Craig – and good luck!

How different it could have looked.  Air transport is an enabling industry: we connect businesses, friends and family.  It’s through aviation that the UK maintains its unique position in the global economy.  It’s how we remain connected in a dynamic world.

Virgin Atlantic generates £3 billion turnover per year, including £1 billion worth of exports, and investing in the latest, carbon efficient technology.  Virgin Atlantic employs 9,000 people and, with the industry as a whole, creates great, highly-skilled technical and service jobs.  I don’t understand why Government doesn’t seem to think we’re a good business.

Government policy has been to give away UK aviation’s birthright to Amsterdam, Charles de Gaulle and Frankfurt.  If we’d had a truly competitive hub then Virgin Atlantic could now have a £5 billion turnover, generating £2 billion of export sales, and offering 15,000 jobs.  BA could be a £15 billion business and a £6 billion exporter, employing 50,000 people.

If we were doing that much business, imagine how many more destinations we’d be flying.  Not least the 26 emerging market destinations that we currently don’t serve from the UK, but our continental rivals do…

We need to start valuing aviation jobs in the same way that we value aeronautical jobs.  The Government loves great manufacturing companies like Rolls-Royce and Airbus but has very mixed feelings about those of us who fly the planes they produce.

How many more Chinese tourists would be visiting the UK?  And that’s before we even talk about visas.  We’re all paying a huge price for poor policy and for Heathrow being full.

After 48 years – actually more like 50 – why is there still no Single Sky for Europe?  The massive inefficiencies remain, which hampers growth and wastes fuel and CO2.

Why haven’t we sorted out effective regulation or competition in airports?  Even something as simple as ensuring competition between airport terminals.  The regulator cannot repeat what they did last time with Heathrow charges doubling in five years.

And why has a tax grab, originally wrapped up in a green cover, now become the highest air passenger duty in the world.  It’s also been shown – in this week’s report by PWC – to be highly regressive.

Not getting this right does damage at the core; damages the heart of the UK and UK aviation.

A truly joined up aviation policy can shift the global economic epicentre.  Look at Singapore; at Dubai; at Abu Dhabi; at Qatar.  And have we even noticed what’s happening in Turkey?

I’m very proud of Virgin Atlantic – our people, our products, our reputation, our fighting spirit.  I’m clear about the benefits we have brought to the UK and to UK consumers.

So the industry looks very different now from when Richard Branson first persuaded me to move from boats to planes.  And I’m proud that we’ve played a good part in that….

But how much better it could have been if the contribution of aviation was properly understood and acted upon.

So, taking us back to adverts.  To steal a well-known beer ad: “if Virgin Atlantic had been doing aviation policy…..”

You can fill in the rest.

But, as I sign off from Virgin Atlantic I’ve been very privileged and feel very humbled by “all the stories I have been able to watch”.