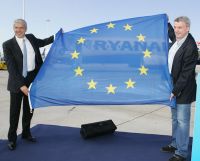 Ryanair's latest bid to take over Irish rival Aer Lingus has been blocked by the EU Competition Commission.  Ryanair called it "political" citing BA’s takeover of bmi, which it claimed was a monopoly, and said that it would challenge the court’s decision.  Ryanair had described the bid, its third, as a final attempt to grab its rival.  It was thought that CEO Michael O’Leary planned to change Aer Lingus into a low-cost long haul airline operating out of Dublin, and perhaps Stansted.

The latest offer by Ryanair to the Commission included ceding 43 routes to a newly created Irish subsidiary of Flybe and hand to British Airways the routes Aer Lingus operates from Gatwick.  It was seen as a life saver for Flybe although that airline has issued a statement virtually saying “business as usual”.  It is believed that the Commission's principle objection was over the viability of the envisaged new carrier Flybe Ireland and whether British Airways would continue the routes after an initial three-year period.

"The Commission will take a decision in this case at the end of February or the beginning of March", said a spokesman for EU competition chief Joaquin Almunia.  Ryanair, with its generally aggressive attitude, has won no friends in Brussels and in Dublin people have questioned a virtual Ryanair monopoly. www.ryanair.com