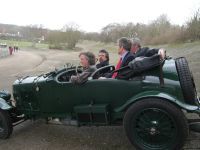 The Heritage Lottery Fund (HLF) announced today the success of a (conditional) £4.85m bid from the Brooklands Museum for a major expansion of its facilities.

The Brooklands Race Track was opened in 1907 as the world’s first purpose-built motor-racing circuit, and, within a year, early experiments in aviation were taking place on the site as well.  It rapidly evolved into an outstanding centre for the development and operation of racing cars, motorcycles and aircraft.

Today the museum occupies a 32-acre site at the northern end of the original circuit and airfield and includes part of the actual banking and the ‘test hill’.  Opened in 1991, it attracts over 150,000 visitors a year including large numbers of school children on educational visits.

The Museum, in a unique nostalgic form, presents the history of motor racing from the earliest days right up to modern Formula 1, and also the history of aircraft manufacture and development over most of the 20th century.  Many of its displays are housed in historic motoring and aviation buildings.  The exhibits include exceptional racing cars such as the 1933 Napier-Railton (the ultimate lap-record holder), and an example of every Vickers commercial aircraft built, plus Concorde, largely designed at Weybridge.  The London Bus Museum is also on the site. www.brooklandsmuseum.com