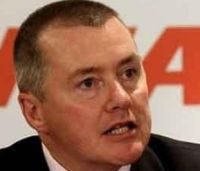 Unions at loss making Iberia will hold five straight days of strike action in the second half of February after failing to come to an agreement with management over job cuts, a spokesman confirmed last Friday.

Willie Walsh, Chief Executive of parent International Airlines Group, of which British Airways is a profitable part, said that he was disappointed no agreement had been reached and the airline would press ahead with a planned rationalisation.

"Iberia is ready and willing to negotiate with the trade unions", he said.  "We are determined... to implement the necessary changes to secure the future survival and viability of Iberia".

The company says that in light of the failure to reach agreement, it will press ahead with its previously stated plan to reduce capacity by 15% this year, by focusing on profitable routes and reducing its fleet by 25 aircraft, rather than the 10% it had put forward in negotiations.  It is also pushing ahead with a fleet upgrade (see BTN 7 January 2013).

Iberia has suffered periodic strikes since it announced the creation of Iberia Express and has estimated about €1m of losses for every day that its crew walks off the job. www.iberia.com