House of Lords and APD 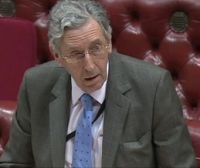 The British upper house, the House of Lords, essentially a revising chamber, has strongly criticised the UK Treasury regarding Air Passenger Duty (APD).

In a debate last week on the tax, peers were critical with many calling for a macro-economic review of the tax.  Lord Palmer, the Liberal peer who sponsored and opened the hour-long debate, said that a growing body of evidence pointed to the economic damage APD was having and noted that the “Government must take this grave situation into account”.

Lord Howell of Guildford, a former Conservative Transport Minister, was particularly outspoken: "This is Treasury obfuscation and short-termism at its worst”, he said, adding that "APD in its current inflated form is working against our friends, against our foreign policy goals and against the national interest".  Ten members of the House of Lords spoke during the debate, all of whom were critical of APD.  Many backed calls from "A Fair Tax on Flying" for a Treasury review. www.afairtaxonflying.org