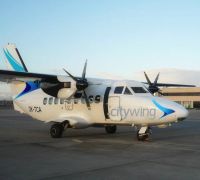 In fact no more than an air travel booking service that questionably called itself an airline, Manx 2, has gone.  Spoken of by some as a ‘virtual airline’ it has now been effectively rebranded as ‘Citywing’, an airline seat seller.  All flights are operated by VanAir Europe AS & Links Air under their own AOCs.

With the new operation the previous Manx 2 programme is flown, with the exception of Leeds Bradford and Oxford from the Isle of Man, which are dropped.  Noel Hayes remains as Chairman and David Buck is the Managing Director.