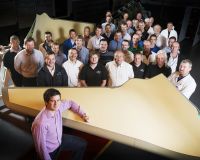 In a demonstration of the complexity of modern aircraft manufacturing GKN Aerospace has delivered the first production aircraft set of winglets to Bombardier at  Belfast for the new Bombardier C Series aircraft.  These will be added to the wing before transporting to Montreal for final assembly.

Delivery of the composite winglets has followed a three-year design, test and initial manufacturing programme which has minimised winglet weight and complexity and maximised aircraft fuel efficiency through improved design and state-of-the-art manufacture and assembly. The C Series aircraft is scheduled to enter into service in 2014.

The winglets will make an important contribution to the aircraft’s targets in relation to fuel burn, emissions, range and performance, which will beat any current aircraft in its class.  Across aviation, winglets are transforming the performance of aircraft, reducing wing drag to bring significant fuel savings – with consequent reductions in aircraft emissions and improvements in payload and range.

Phil Swash, CEO – Europe & Special Products Group, GKN Aerospace, comments: “The design and development of this winglet has involved the full expertise of our team.  We are commencing now on a production programme that will continue beyond the end of the first quarter of this century”.  http://cseries.com