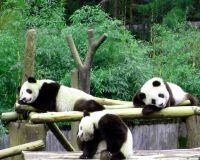 As part of celebrations to introduce new services to Seoul (using slots acquired with the bmi takeover) BA announced just before Christmas a new route to Chengdu in South West China.  The thrice-weekly service, which is now on sale, will start in September.  The route will be served by a four-cabin Boeing 777 with First, Club World, World Traveller Plus and World Traveller.  British Airways already serves Beijing, Hong Kong and Shanghai in China.

BA has also confirmed that for Summer 2013 it will be increasing frequencies on flights from Heathrow to Amman, Chennai, Hyderabad, Jeddah, Mexico City, Rio de Janeiro and Toronto, likewise all the necessary landing and take-off positions coming from the purchase from Lufthansa of its once great British rival. www.ba.com