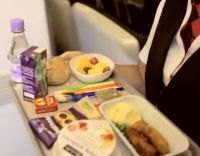 British Airways has always been an airline with children in mind.  Someone, a long time back, recognised that the child traveller of today could be the Business Class passenger of the future.

For 2013 in the lounges at Heathrow Terminal 5 children will start to see refreshed 'Kidszones', which will feature bright new furniture including beanbags and floor cushions; talking mirrors on the walls; sensory blocks and aviation-inspired toys for younger children and power chargers for smartphones and iPads.

In the Skyflyer Solo lounges, used by children travelling alone, there will be further enhancements including football tables, balance boards, mini fridges stocked with a complimentary selection of snacks and drinks; and goodies.

In addition, British Airways has partnered with Microsoft to provide children with access to the latest in games technology with the Xbox in the Kidszones and Xbox Kinect in the Skyflyer Solo lounges.  A library of age-appropriate games is available too.

The airline also recently introduced extended in-flight entertainment, which means children can access the video units as soon as they board until they land at their destination (hooray).  Thousands of new 'Skyflyer' packs for children have also been created which includes an activity book, crayons or pens in a drawstring bag. www.youtube.com/flybritishairways